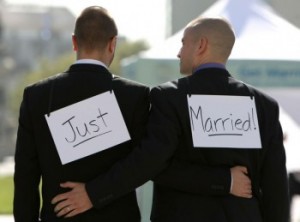 Gay pride is running high after the US president declares that he will support the same sex marriage.The announcement put him odds with his rival and Republican presidential nominee Mitt Romney, who opposes gay marriage.The president said, at certain point he had just concluded that for him the personally is important to go ahead and to support  the cause.Though the president once opposed the same sex marriage,he was disappointed by the Tuesday’s vote on the issue in North Carolina which he described as discriminatory against gays and lesbians. The president of the human rights campaign Chad Griffin lauded the Obama’s decision and said the president’s words will be celebrated by generations to come.

Do you like this News?
« Older News: US to help in hunting down warlord ‘Kony’
» Newer News: African Painted Dogs Killed 2 Year Old Boy