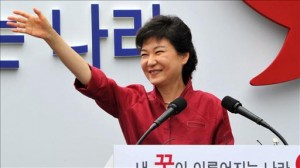 Mr. Moon has admitted his failure against Ms Park before the votes are declared, he turnout before the polls get declared. Ms. Park will replace Lee Myung-bak as the law requires after finish of five year term of president on February 15 2013 . Mr. Myung-bak congratulated Ms Park on her victory and wishes her good luck.

Ms. Park said ” i will keep all the promises which i have made, This is considered a victory for people who want to overcome crisis and revive the economy of the country.I will never forget the will of the people who believed in me wherever i went during the election campaign”.

Supporters and Many people are saying that Ms. Park election will give a real social change in South Korea.

Park promised that she wont keep any difference between the rich and poor citizen of South Korea and she will be same for every citizen and help them by coming forward.

After the turnout of Mr. Moon polls closed the combined figures were given Ms Park 50.1% of the vote and Mr. Moon 48.9% of the vote , but the results are not yet confirmed by the country’s National Election Commission.

Do you like this News?
« Older News: Indian Gay Rights Parade Demands For End Of Discrimination
» Newer News: Skulls Like ‘Alien’ Found In Mexico

Crossing India, South Africa Wants To Grow Its Own Industry
Global Previous News: German Policy Not To Use Real Name On Facebook
Global Next News: Skulls Like ‘Alien’ Found In Mexico