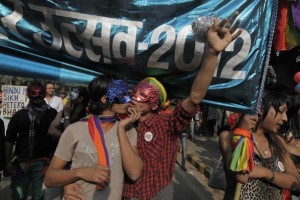 New Delhi: Hundreds of gay rights supporters have marched through New Delhi demanding they be allowed to leads lives of dignity in India’s deeply conservative society. With a 15-metre-long rainbow-coloured banner and waved placard, dozens of activists were demanding the government to extend the scope of anti-discrimination laws to schools and offices. Activists said that three years after the Delhi High Court made changes in India’s colonial-era law that made gay sex a crime, homosexuals are still not socially accepted in India.

In 2009, the court had declared that the gay sex is not a crime. But before 2009 gay sex was a crime by up to 10 year in prison. Conservatives groups have asked India’s top court to take out the lower court’s order and Supreme court judges are currently hears opinions from conservatives groups and gay rights activists. But its not clear that when the court will its decision.
The activists marched to the rhythmic beat of traditional drums and music and they had carried placard on which it was written that “Queer and loving it” and “Give us your support”. Other gay supporters distributed badges and rainbow-colored flags and scarves.
The activists are demanding for the discrimination against gays, lesbians and transgenders have to end and they also can live life in society as a normal individual. They are also demanding that the government allow people to record the gender category of their choice in the national census, voter identity cards and all other government documents
An activist said that “The government has to listen. Our struggle has gone on for very long, and we are hopeful the government will listen and act on our demands. “
A statement issued by rights groups at the parade said that “We are demanding that all people be allowed to exercise their right to live their lives with dignity and freedom, regardless of their gender or sexual orientation.”
In some big cities, homosexuality is slowly gaining acceptance and few high profile Bollywood films have made films with gay issues.
Still, many of the people in march have covered their faces with scarves or mask because they have not told their sexuality to their friends and families.
Do you like this News?
« Older News: Natural Gas Explosion 18 Were Injured
» Newer News: Ms.Park Won The Election As First Female President In South Korea