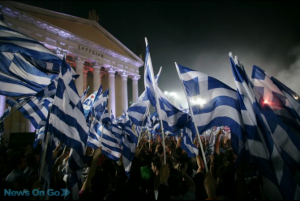 Voters in Greece headed to the polls on Sunday take part in parliamentary .It is expected that no party will win a majority and a coalition will have to be formed.The outgoing government have introduced a series of austerity measures inorder to secure a bailout funding for Greece which is at the centre of an economic crisis. Evangelos Venizelos,the leader of the left-leaning PASOK party, declared “everything is at stake Sunday,” as he addressed a campaign rally in the capital.He said, “Voters have a choice to remain in eurozone and follow a difficult but a safe path or to take a dangerous path that may take the country 20 years back and lead the nation to bankruptcy and poverty”. Antonis Samaras, leader of New Democracy party, urged voters to stay behind his party at a rally in Athens on Thursday.He said, “I don’t wish to rule jointly with PASOK and it is not in the interest of the Greek people for such a coalition to take place.” Greece’s massive debt has threatened the stability of the eurozone for almost two years. The outcome of Sunday’s vote will be closely monitored to see if Greece is able to stick with the difficult path of austerity.

Do you like this News?
« Older News: Britain To Put Surface-To-Air Missiles On Top Of Flats To Protect Olympics
» Newer News: Superman err…. “Supermoon” to arrive tonight