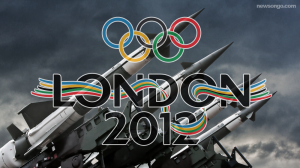 UK will site surface-to-air missiles on the roof of flats near the Olympic site as part of security operation to protect the Games.Residents in the private flats in Bow have received a leaflet warning them that a team of soldiers and police will stationed there for the duration of the summer’s games.The missiles will act as a deterrent against any airborne terrorist threats and only be used as a last resort .

Do you like this News?
« Older News: Australian Billionaire To Build Titanic 2
» Newer News: Greek Voters Head To Polls

Britain To Put Surface-To-Air Missiles On Top Of Flats To Protect Olympics is tagged as 2012, London, Olympic, surface to air missile

Global Previous News: Australian Billionaire To Build Titanic 2
Global Next News: US to help in hunting down warlord ‘Kony’